Albatross, called “thought-provoking and moving” by Washington City Paper, is a collaboration between MOVEIUS Contemporary Ballet and improvisational chorus Parallel Octave that uses music, movement, and spoken poetry in German and English to create a whimsical and unique universe. Through the relationship between layers of texts by Heinrich Heine, Samuel Coleridge, and others, the piece explores the liminal space between languages in translation and questions the often monolingual culture of American theater through physical movement. Albatross premiered at Montgomery College Cultural Arts Center in April 2014 and has subsequently been performed at Johns Hopkins’ Arellano Theater, Baltimore Theater Project, the Lang Theatre at Atlas Performing Arts Center, Christopher K. Morgan’s Dance & Dessert, and the Gordon Center for the Performing Arts. The creation of Albatross was made possible by the Center for Advanced Media Studies at Johns Hopkins University.

DC Theatre Scene says: “It seems an exercise in modes of translation, from one time to the next, from one language to another, from written word to gestures of the body. More than either of the subsequent works, the many dimensions of The Lorelei, the Albatross, and the Pine Tree at times feel disorienting. . . It’s a bold move on MOVEIUS’s part to lead with the most challenging of the three pieces, and it serves as an apt introduction to the concert as a whole.” 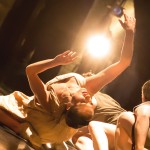 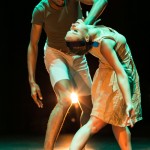 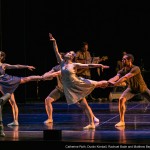