Invisible Steps examines the relationship between virtuosity, expression, and notation in dance. What should dance look like? How should we talk and write about dance? What is important, the replication of a choreographic text, or the essence of the movement? Through the integration of dance, text, and music, Invisible Steps performs a series of long-standing debates about dance and text which are, after all, based in the physical movement of the body. More broadly, combining thinking and doing, it asks audience members to consider how knowledge about performance is constructed, and how the answers to certain of these questions may be dependent on national, political, and cultural contexts and individual particularities of the work.

In 2015 Invisible Steps was remounted as a performance lecture and was given at the Performance Philosophy Conference in Chicago and at Bowen McCauley Dance’s Move Me Festival in Arlington, VA. This new version of Invisible Steps was supported in part by a rehearsal space subsidy grant from Dance Metro DC, the regional service organization for dance in the national capital region. 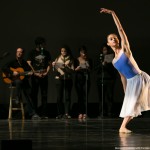